Astigmatism affects the cornea, which is the front surface of the eye and has the shape of a football rather than a sphere.  This causes the image that is formed on the retina to be distorted.

A cataract is an opacity of the eye's crystalline lens. This disorder causes individuals to lose their vision's clarity. Nighttime glare when driving is frequently one of the earliest indications of the onset of cataracts. For the majority of patients, we treat cataracts with the most recent surgical procedure involving no patches or stitches.

The cornea is the outermost layer of the eye that is transparent. Its bulging curve provides the majority of the eye's refraction. The cornea is reshaped during laser vision correction.

During laser vision correction, the VISX Star S4 Trak laser with CustomVue software utilizes a three-dimensional, active tracking system to monitor the eye's small movements. This guarantees that the laser beam is applied precisely to the cornea. 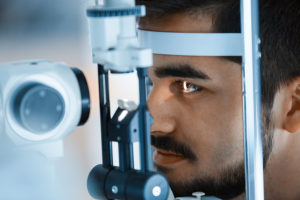 Glaucoma is a condition in which abnormally high intraocular pressure affects the optic nerve and leads to vision loss. Glaucoma can be diagnosed during a normal eye examination and is treatable with eye drops, laser therapy, and surgery.

In farsightedness or hyperopia, vision is blurry at all distances but can be corrected. Commonly related with eyestrain, the condition is caused by a flat corneal curvature or a shortened eye length.

LASIK is a non-painful surgical treatment used to correct myopia, hyperopia, and astigmatism. Initially, a protective flap is produced in the cornea's outermost layer during the surgery. The excimer laser is then utilized to sculpt the corneal tissue beneath the cornea. The flap is finally replaced. The recovery period is often brief, and the majority of patients can return to work the following day.

A patient's dominant eye is corrected for distant vision during monovision, while the patient's non-dominant eye is corrected for near vision. This permits the presbyopic patient to see clearly both up close and far away for the majority of their activities. We employ monovision in conjunction with LASIK and cataract surgery to lessen the likelihood that a patient will require glasses after the procedures.

In the case of nearsightedness, distant things are out of focus. When the cornea is too steep or the eye is too long, light focuses in front of the retina rather than directly on it, resulting in myopia.

An ophthalmologist is a physician who specializes in the eye and the visual system. He or she has completed medical school and a minimum of four years of post-graduate study in eye disorders and surgery. Ophthalmologists are authorized to examine and operate on the eyes.

Presbyopia is the age-related inability to see close-up objects. This natural ailment affects the majority of forty-year-olds. Monovision is usually used in conjunction with Near Vision CK to treat this condition.

PRK is a surgical procedure in which the corneal surface is reshaped using an excimer laser. It differs from LASIK in that there is no protective corneal flap formed. Instead, the laser is directly administered to the corneal surface. Consequently, PRK has a longer recovery period and is not the recommended method of laser vision correction.