What Medications Are Used for Treating Glaucoma? 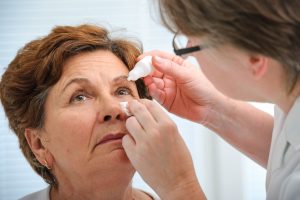 Administering eye drops to a patient

Glaucoma is the second leading cause of blindness in the world. It’s estimated that more than 3 million Americans have glaucoma, but only half of them realize that they suffer from the disease. Glaucoma is incurable, but with smart and properly timed diagnosis and glaucoma treatment, the loss of vision can be slowed down or even stopped.

The team at our West Orange eye care facility would like to go over the use of medications for the treatment of glaucoma. We’ll look at the common kinds of drugs and then offer an overview of their side effects as well.

When Is Medication Recommended for Glaucoma Treatment?

Medicated eye drops are often the first treatment option for glaucoma. These drugs help slow down the progression of the condition, and in the process they help stop serious vision loss from occurring. When glaucoma is diagnosed, medications are prescribed soon after unless the condition is in more advanced stages.

If glaucoma medication proves ineffective, other more aggressive forms of treatment are likely.

Side Effects of Prostaglandin Analogs

Some side effects associated with prostaglandin analogs include:

Side Effects of Beta Blockers

Some common side effects of beta blockers include:

Beta blockers can cause serious adverse side effects in people who suffer from heart disease, lung disease, diabetes, and depression. These conditions must be taken into account before an eye doctor prescribes this kind of medication.

Side Effects of Alpha Agonists

Some common side effects of alpha agonists include:

Carbonic anhydrase inhibitors (CAIs) work by reducing the production of intraocular fluid, thereby decreasing the presure within the eyes.

CAIs are available in eye drop and pill form. Eye drop forms of the medication include:

Pill forms of the medication include:

Some common side effects of carbonic anhydrase inhibitors (CAIs) include:

Some patients may need more than one type of medication to address their glaucoma. Combinations of the above drugs can be used in these cases. Doctors must take special care to avoid contraindications and other potential dangers when taking multiple drugs at the same time.

For more information about treating glaucoma and preventing further vision loss, be sure to contact our advanced eye care and vision correction center today. The team at Laser Vision Correction Center of New Jersey is here to help you achieve better overall vision.